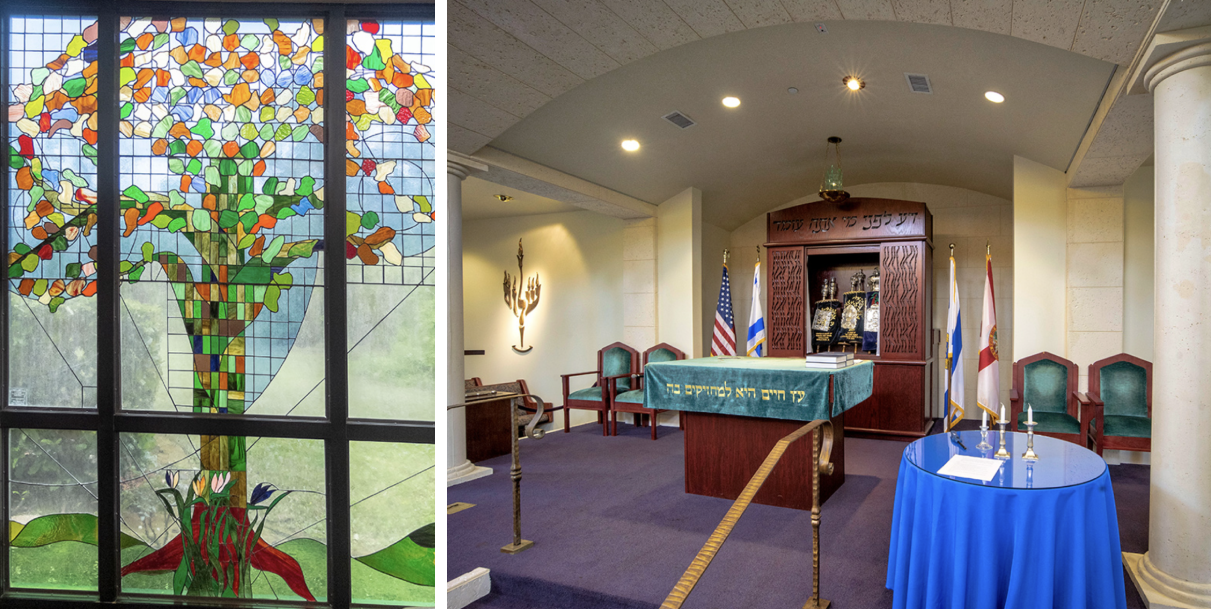 Read glimpses into our past and what makes the long standing tradition and history of Beth El The Beaches Synagogue so special.

In February, 1991, the Beaches Hebrew Association was “born” under the leadership of our first President, Allan Solomon. First meeting in a church, and later at the Ribault Garden Club, the congregation began to “take hold”.

Because of some beginning concerns about the legibility of the original Torah, and the wish to avoid “re- rolling” the one Torah when two widely separated Torah portions were read at the same service, in 1994, the Ackerman Family, Scot, Alex, Isabella, Gigi, and Max, donated the second Torah in memory of Aine Wasserman Ackerman Sklar.

In the Spring of 1996, after Samuel Miller’s death in 1995, Nedra Harkavy-Miller made a major contribution to the synagogue, which, along with many other contributions from the congregation, enabled the synagogue to purchase the third Torah, and to have congregants participate in “the writing of a Torah”. It also enabled the congregation to have three Torahs during the Bet Din part of the Yom Kippur service.

We moved into our new, beautiful building on Roscoe Boulevard in May, 2004, and in the Fall of 2004, Michael and Pepi Kahn donated our fourth Torah in honor of Morton Kahn and Sylvia Kahn Hillson. This Torah is exceptionally light due to its specially processed parchment, thus making it much easier to carry the Torah during regular Saturday morning services.

After Rabbi Ben-Yehuda became our spiritual leader, he noted that the first Torah had suffered damage from being moved around and stored in “less than ideal conditions” during our “wandering phase” before moving to a permanent home on our own land. In the Summer of 2005, Nedra Harkavy, again came to the “rescue” and donated the money to repair that Torah.

Late in 2005, Michael and Pepi Kahn again donated another Torah, this one a Sephardic Torah in honor of Rebecca Cissy Stern, Harold Stern, and Harold Stern, Jr. The parchment is different from the other Torahs in that it is deerskin. The alphabet used is different as well – Sephardic Torah scrolls are written in a font called “vellish” which is quite different (and less fancy) than the “beyt Yoseph” font used by Ashkenazik scribes. This Torah scroll is over two hundred years old, and was prepared in Iraq or Syria.

In the Fall of 2007, the Kirsner Family and Temple Zion Israelite Center donated our 6th Torah in honor of Hyman Kirsner.

We now have six Torah scrolls, thus enabling anyone to be able to hold or carry the Torah on our special holidays or even a regular Shabbat. May our synagogue only continue to grow and prosper.